After the last Fordyce trip I developed steering wheel wobble (death wobble) while driving between 35 and 40 miles per hour. When I turned the wheel slightly it would go away but if I was going straight it would occur. I took my Jeep to the tire shop that installed my tires for a free rotation and if necessary, for balancing. It didn’t help and seemed to have made it worse. Their only solution was to de-rotate my tires, which they did.

Last week I took it to Les Schwab in Rocklin and they rotated and rebalanced my tires. I still had the same problem. I did some additional research on the web and found a diagnostic tip. They said that with the motor running and the vehicle in neutral, have someone turn the steering wheel back and forth between 10 and 2 while you get under the vehicle and watch for movement of the track bar. Sure enough there was a little lateral movement of the track bar on the driver’s side at the heim joint end. While not a lot of travel, perhaps a 3/16 to ¼ inch at most, I decided to order new races for the heim joint. I found out that I also needed to order a special, custom tool from Rubicon Express to rebuild the heim joint. So I ordered the races and the tool. But the technical service rep at RE told me that the heim joints wear and that you can usually tighten them up with the4 tool two or three times before you need to replace the races.

Today, after I picked up the new races and custom spanner tool at WFO, I removed the track bar and just tightened the joint with the tool. I reinstalled the track bar and took it for a ride. No death wobble. I was surprised at how little play in the track bar could cause such significant death wobble. At a certain speed it produced a (harmonic?) vibration that went away when I went faster or slower. Anyway, if you have the same problem it may just be a simple fix. I will save the new races until the existing ones need replacing. 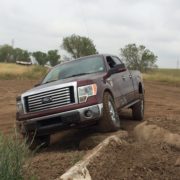 Glad you figured it out. 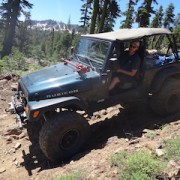 I wish you had posted up, I have both the large and small RE joint tools that I lend out and I think a few others in the club have them as well.  But now you have one as well so you dont have to worry about borrowing one when you need it

Thanks for sharing the knowledge Jeff. Good to know.