Does anyone else keep up with the FOTR mailing list? There was a El Dorado county board of supervisors public meeting Tuesday night to decide the fate of Rubicon. My understanding is they were voting on three options #1 was favored by the greenies, #3 was favored by FOTR and most 4x4 recreationalists. Sorry I don't know what the details of each of the options was, but you can probably find it on the Pirate board if you're interested. The board voted for an amended option 2. The amendment was to resize the rocks in Little Sluice. They're leaving it up to Tom Celio with DOT to determine a reasonable size for the rocks.

Thanks for the update. I don't follow the email. 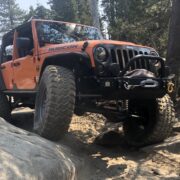 I no longer receive anything. I used to, but haven't got anything in about a year...

I say we resize the rocks...make them BIGGER

You can't keep up with me now, making them bigger would just leave you that much further back

"JohnDF" wrote: I say we resize the rocks...make them BIGGER

"RobD" wrote: You can't keep up with me now, making them bigger would just leave you that much further back

From the guy that had to step up to 40" tires to finally make it through the Sluice...throw some 37s back on, run it, then talk smack

"JohnDF" wrote: [quote="RobD"]You can't keep up with me now, making them bigger would just leave you that much further back

From the guy that had to step up to 40" tires to finally make it through the Sluice...throw some 37s back on, run it, then talk smack

I have a picture just like that of me at the start of the LS..Just none after that of me on 37's

Placerville, CA January 26, 2010: El Dorado County Board of
Supervisors voted to formalize the alignment of the world-famous
Rubicon Trail. This decision includes a handful of important bypasses
around some of the more difficult sections of trail, providing trail
users the option of taking a less difficult route around the toughest
segments of trail. In a meeting which lasted well into the night, the
Board of Supervisors heard arguments from county residents, off-
highway vehicle enthusiasts, environmental activists, the U.S. Forest
Service, and the State Parks OHV Division about how to best define the
trail which winds through the scenic Sierra Nevada west of Lake Tahoe.

The Board of Supervisors discussed options for addressing a Cleanup
and Abatement Order (CAO) issued by the Central Valley Regional Water
Quality Control Board. The DOT listed three options for consideration,
ranging from establishing 1.) a single defined trail, 2.) a defined
trail with bypasses around the most difficult sections, and 3.) a
‘corridor’ option which would have included wide areas where specific
trails might be defined. In the end, the Board of Supervisors chose
the option of a single route with bypasses, which they felt provided
the widest range of opportunities for public access while still
addressing the CAO. Tom Celio, Director of DOT, stated that all
options presented would be able to address the CAO.

This County action formally recognizes the main alignment of the
Rubicon Trail and a handful of alternate routes with multiple levels
of difficulty near Devil’s Postpile, Forgotten Sluice, Little Sluice,
Indian Trail, and the True Old Sluice. Selecting this middle option is
a balance between recognizing a single trail and recognizing every
existing alternate and bypass. "In reality we lost very little" said
Scott Johnston, President of the Rubicon Trail Foundation, “We are
still committed to working with the County – this was a good step
toward satisfying the Water Board’s CAO."

In a frustrating last-minute twist which caught the public by
surprise, the Board of Supervisors also voted to reduce the size of
the largest rocks in the iconic Little Sluice Box, a signature section
of Rubicon Trail near Spider Lake with high technical difficulty. This
controversial proposal, was put forth by Supervisor Jack Sweeney after
the public comments session was closed. “I and other members of our
volunteer community were blind-sided by the discussion/decision to
alter Little Sluice”, said Jacquelyne Bebe Theisen, Trail Boss for the
Friends of the Rubicon (FOTR). “Our volunteers deserved the
opportunity to discuss the alteration of Little Sluice with the Board
of Supervisors – and we will. This is not over.”

RTF and FOTR will work together to push the County Department of
Transportation, to lead organizations, and agencies together to
identify and employ non-explosive management techniques to minimize
impacts at Little Sluice and still comply with the Board of
Supervisors’ instructions. In the meantime, FOTR and RTF will continue
to work with the County to mitigate concerns in the area by
distributing WAG bags (for collecting human waste) and spill kits (for
cleaning up fluids spilled by damaged vehicles); reaching out with
education from the kiosks, providing roving trail patrol and mid-trail
staff; and delivering internet-based education.

On several occasions during the course of the meeting, the Board of
Supervisors expressed how grateful they were for the incredible
commitment of the (OHV) community who volunteer thousands of hours a
year educating trail users, performing trail maintenance, and cleaning
up and addressing sanitation issues.

The volunteers of FOTR, Jeepers Jamboree, California Association of
Four Wheel Drive Clubs, and many other local clubs and independents
have worked together to maintaining Rubicon Trail for more than 50
years. The joint efforts of the County, the Forest Service, the
California OHV Division, and these volunteers provide an unprecedented
example of a collaborative process that works, and are a shining
example to land managers and user groups across the nation. “We have
to move forward, and keep our volunteers motivated. It's going to be a
challenge, but we can and will succeed,” Theisen added, “We are
relieved that after ten years of discussing the issue of trail
alignment with little action, the County has finally identified what
routes they will maintain in conjunction with the Volunteers.”

FOTR’s extensive volunteer coalition coordinates with RTF’s federally
recognized non-profit organization, and with 8+ years of FOTR
volunteerism and 5+ years of RTF fund-raising, we expect that the
Rubicon Trail will continue to be an environmentally sound, viable,
year-round trail accessible to the public for years to come. If you
would like to help with our efforts, you can sign up for a Friends of
the Rubicon work party at: http://www.FriendsoftheRubicon.com or send your
tax deductible donations to: Rubicon Trail Foundation PO Box 2188
Placerville, CA 95667. Donations may also be made with Paypal or major
credit cards by calling 888-6RUBICON.

For more information on this topic, or to schedule an interview with a
representative of RTF or FOTR, please e-mail Scott Johnston at
[email protected] or Jacquelyne Bebe Theisen,
Friends of the Rubicon Trail Boss and Volunteer Leader at
[email protected]

That just shows that the Little Sluice is a major concern to them. I would have to slightly agree with it too. Running the Little Sluice is fun, but it is a pain on the weekends when there is a huge party going on. You have tons of people there all day long, no bathrooms, lots of drinking, it just makes for a potential problem. Why risk the whole trail for one obstacle? I hate to see anything get shut down or reduced though.

Maybe Cal4Wheel should develop an easy-to-get-to Little Sluice obstacle somewhere. It could include parking and restrooms and would be easy to patrol.